Machine Learning And Scripting In Ocaml

This has been the first vacation in a very, very long while that I ended up actually taking a break. And man, did I fucking need that. It's not quite over yet, but almost. We're on Saturday of the trailing weekend of my week off. If you've been paying attention to my output, you'd realize how fragmented my thinking time has been lately. Again, mostly a result of work. That's sort of to be expected from a startup environment, but my off time hasn't been this sparse since I was back at my first company, and I'm beginning to wonder if I should be several times louder about it than I currently am. We'll see how my first week back goes, I suppose.

During my downtime, I've literally been eating, sleeping, working out, and spending time with the family. Which is doing me some serious good, if my own subjective experience counts for anything. That's a thing you occasionally need. The extent of my programming-related activity has been 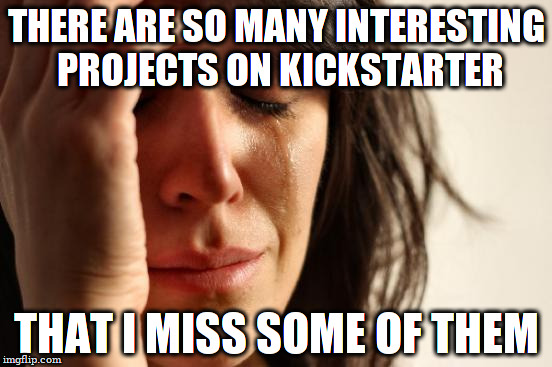 kicktracker feeds now include project thumbnail images, as well as blurbs. This makes it mildly easier for humans to scan through feeds, and sift out the occasional nugget of gold from among the refuse.

And that not-so-subtle point is exactly where machine learning comes in for my purposes. The probelm is, even with category and search terms being as restricted as they are on my preferred feed, the signal-to-noise ratio is unacceptably low. What I'd really like, I think, is a recommendation engine. Which means taking one or more machine learning techniques, and applying them to the problems of

That doesn't sound particularly hard, but I'm not entirely sure where to start. Which is where the course comes in. The first section is entitled "Naive Bayes", which seems to be a classic linear separator approach to supervised learning. Let me unpack that, for all our benefit.

Goals 1 and 2 above seem like perfect fits for this approach. We've got a corpus of all existing Kickstarter projects available from their archives, we can tell whether they were successfully funded or not, and we can very probably pull out some user data to figure out whether most of the backers have received their rewards.

The last part is the only one I'm a bit iffy about, and it's really only because I've got such a small pool of applicable examples. I've backed about 20 games at this point, so the resulting recommendations are probably going to be very narrowly scoped. Which on reflection might not be a bad thing, given that my problem is way too much noise for too little signal. I'll let you know how all this goes.

It honestly isn't enough code that I'd normally mention it, but there's been little enough that this stands out. It's another block of code for my shell-ui project 1.

Recently, I got a new Android device, you see. And they no longer just mount up like regular external volumes. Now you've got to deal with the MTP protocol in order to get files on or off of the device. There's a suite of command-line tools in Debian that make this possible, though not exactly easy. mtp-sendfile is the one that you'd use to put a file onto such a device. The main beef I've got with it is that I need to enter the name of the target file twice2, and I don't want to have to say it manually.

This is about four lines longer than I was expecting it to be, mainly because I had to write tail myself. I'm ... honestly not sure why. Presumably I need to include the correct library to get this resolved for me, but don't know what "the correct library" is here. I was sort of expecting List.tail to be a thing, but it isn't3 if I trust my ocaml shell

Ho hum. The other bad thing is that I'm using Printf.sprintf to put together the argument to Sys.command, rather than using something more appropriately high-level and path-respecting. I'm assuming that the Shell library will give me all the usual auto-escaping goodness I'm used to from almost every other language I use.

At this small a scale, I can't honestly tell whether this is any kind of improvement over python or ruby for the same purposes. The resulting binaries are much smaller than equivalents built over in Haskell4, but that's about it.

3. OCaml lacks typeclasses out of the box (advantage: Haskell)

Since I kinda want to do something serious with OCaml or ML, I'm pretty sure I'll try to reproduce the rest of the Python script suite in one or both, possibly along with Haskell, and report back regarding how it went.

Cleaning Up The Archives

I've been running through my archives, making corrections and updating the old postst to MultiMarkdown footnote syntax, and it tripped off the need for some light meditation. This is a subject I've touched on in the past, and it hit me again at full force. These days, there is no such language as "the one I enjoy using". There are bits and pieces that I absolutely want from Common Lisp, Scheme, Clojure, Haskell, ML, and Go but there is now no such thing as a language that combines most of them. There can't ever be a language that combines all of them, because some contradict each other, or at least work at cross-purposes.

This at once makes me feel sad and liberated. Sad, because why the fuck would I want to settle for less than the best possible language? Liberated because, if I'm going to be stuck with garbage languages anyway, I may as well start looking at cross-language techniques and approaches5.

all articles at langnostic are licensed under a Creative Commons Attribution-ShareAlike 3.0 Unported License

Reprint, rehost and distribute freely (even for profit), but attribute the work and allow your readers the same freedoms. Here's a license widget you can use.

The menu background image is Jewel Wash, taken from Dan Zen's flickr stream and released under a CC-BY license